Here’s an interview with Corporate Citizen. My questions has been answered by the entire band so I had to shorten it down a bit. If you are into melodic hardcore you will probably like this San Diego band with strong influences from the 90’s hardcore punk scene. Here we go.

Steve O: I am Steve O’Brien and I play guitar.

Bob: I am Bob Meder and I sing

Dan: I am Dan Achin and I play drums.

I wrote in the review that your music sums up four decades of hardcore, do you agree? How would you describe your music?

Steve O: I always love seeing the references to the DC bands (Minor Threat, Fugazi) when it comes to describing our music. The style of guitar and structures of the songs were heavily influenced by the DC bands. Our style of music sits between what people would consider traditional hardcore, melodic hardcore and post-hardcore as well.

Bob: I totally agree with Steve but would add that some of the stuff we do with vocals can be reminiscent of the 90’s Epitaph and Fat Wreck bands as well.

Dan: I come from a little bit of a different background than Bob and Steve O’Brien.  I spent the first 26 years of my life in Omaha, NE and when I started playing drums I was into metal. I got into Hardcore, Punk and Ska late, and even though I really like Hardcore bands like The Gorilla Biscuits, Judge, Killing Time, and Ignite, I probably identify more with 90s Punk and Ska. 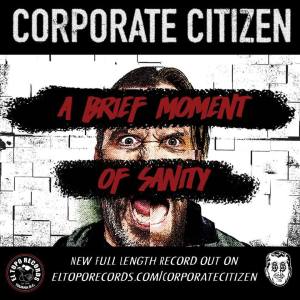 What was your ambitions when you formed the band?

Steve O: Bob, Dan and I were all in bands with each other previous to Corporate Citizen. When Bob reached out to me about playing again I was psyched since we were always on the same page in terms of music. Plus he is a great frontman and brings a lot of energy. Dan is a great drummer who can also help with the songwriting. It was a perfect foundation to start a new band.

You pick up a lot of influences from the 90’s melodic hardcore scene, what was the best with that era and how do you think that the scene has been developed from that time until now?

Steve O: I was lucky enough to play a lot of great shows in the NYHC scene in the 90s in my previous band. To me the 90s were a great time because you had bands like Quicksand, CIV, SOIA and then H20. All blending together the great elements of the Bad Brains, Cro-Mags and AF. Kid Dynamite is a perfect example and a band I take a lot of inspiration form when coming up with a riff. Fast, hard and melodic.

Bob: I think the era of 90’s melodic hardcore  was especially cool because you had a lot of bands that were pretty uncompromising in their style and sound that were able to reach a very wide audience. To me the best bands from that era were H20, Pennywise, Pulley, Bad Religion, Bouncing Souls, Kid Dynamite, Avail, and Strung Out to name a few.

Mike: I think the melody is the best part. There is always melody in music. Some groups utilised it better than others, but in the 90’s it reached a new level. In my opinion that whole metal core scene is what killed the melodic hardcore. It’s nice to see melodic hardcore coming back.

How is the San Diego punk scene? Any good venues or bands you can recommend?

Bob: The scene is doing well! There a bunch of promoters who really want to build a scene here. Venues are always popping up but the most popular are probably Tower Bar, Brick by Brick, The Observatory, and the Belly Up. But there are smaller places like Legacy Brewery that are always willing to host a punk or hardcore show. San Diego is full of great bands right now. You should check out the Spotify Playlist “San Diego Punks United”. It showcases a lot of the great bands that are currently playing around here. Some of my favorites are Wanted Noise, Gut Punch, Skipjack, Fishing For Chips, War Fever and Bossfight.

Dan: There are definitely a lot of really cool bands in the San Diego area right now and for the most part, everyone supports one another.